It’s almost Thanksgiving, which means lots and lots of good food. I haven’t eaten meat in over ten years, so I tend to get pretty excited about sides and desserts. With all of our family back in Tennessee, Josh and I will be doing our first solo Thanksgiving here in San Diego. I have gotten some of my favorite recipes from my Grandmother and so we’re going to attempt our own little feast this year.

Every year my Grandmother makes three pies: apple, pumpkin, and pecan. I mastered the apple pie several years ago, (I seem to have become the de facto apple pie maker back home) so I thought I’d take on something new this year. This past year we’ve really pushed ourselves to try new recipes and cooking techniques whenever possible and between Thanksgiving and Christmas, I plan on baking all kinds of treats!

My Grandmother’s recipe calls for canned pumpkin puree. However, we’ve been trying to make food with as few preprocessed ingredients as possible, so I thought that I’d try making my own pumpkin puree. It turned out to be super simple to pull off! I used two sugar pumpkins. All you have to do is cut the pumpkin in half (I cut the ends off, but you don’t have to) and deseed the pumpkin, then roast the pumpkins at 400F for 40 minutes.

If you choose to do this, just make sure that you are using sugar  pumpkins (also called pie pumpkins.) Initially, I was planning on using a carving pumpkin that we had left over from Halloween that we never carved. However, I did some research online and stumbled on blog after blog about roasting carving pumpkins and they never came out right for a pie. Carving pumpkins are similar in flavor to a squash, and to get that sweetness you find in pumpkin pie, you really need to get a sugar pumpkin. Luckily, they’re easy to come by and pretty cheap.

Don’t forget to save the pumpkin seeds for a delicious snack! Clean the seeds, coat with oil, sugar, salt, cinnamon, and allspice. Bake in the over at 350 for 30 minutes. So good!

Once the pumpkins have finished cooking, let them cool for about 15-20 minutes, or until you can handle them comfortably. Then you will need to remove the outer skin of the pumpkins. I cut the pumpkin in half once more and the skin just peeled off. Then throw those suckers in a food processor and puree until smooth. I added two tablespoons of water per pumpkin to give it a creamer texture.

In keeping with our “as little preprocessed ingredients as possible” them, we also made our crust from scratch. I have always been a fan of homemade pie crust, and it’s only four ingredients and takes about 15 minutes. To make this dough you can either roll it out and mix it together that way or I used a food processor and pulsed the dough a couple of times until it get all flakey and the butter is combined.

Once the dough is all combined put it in a mixing bowl and freeze for ten minutes. Removed the dough from the freezer and let it sit out at room temperature for about two minutes. Once the dough gets close to room temperature, add 1/4 – 1/2 cup of ice cold water. Start off with 1/4 of water add mix it together, after a minute, you should be able to tell if the dough is holding together. If the dough isn’t starting to stick together, gradually add more water and keep mixing until you get the desired consistency.

Once your dough is all mixed, transfer to a lightly floured surface. Since pumpkin pie does not have a top pie crust, I wrapped half of the dough and put in the freezer for future a pie. 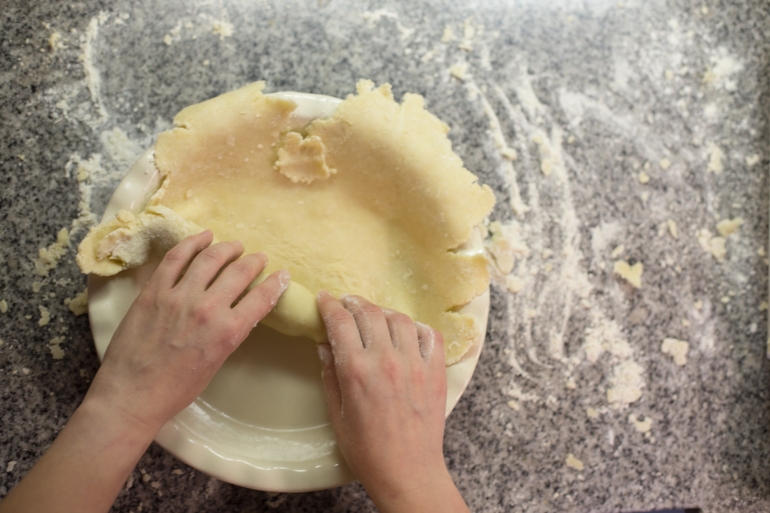 Next, roll out the pie crust to your desired thickness. I usually go for a bit of a thicker crust, but that’s all up to preference. Since this is a super flakey crust, the best way to put the crust in the pie dish is to loosely roll up the dough off the floured surface and unroll it once it’s in the dish.

I never seem to roll out the crust wide enough to fit the dish, but with this crust you can easily patch it up by taking some of the extra dough and flattening it to the same thickness as your crust and just pressing the edges into the rest of the crust. Once your crust is over the edges, cut the remaining off with a butter knife. Then you can flare up the crust by taking a fork and pressing into the edges.

Now back to that delicious pumpkin pie filling! Measure out all of your ingredients. Tradionally pumpkin pie is made with condensed milk, but we don’t typically go through much cow’s milk and use almond milk for pretty much everything. This is fine to do, however, since almond milk doesn’t have the same thickness as condensed milk, I added corn starch to thicken the milk. Substitution in cooking is all about knowing your ingredients’ limitations so that you can compensate for them.

(Side note, if you want to make this a vegan pie all you have to do is replace the eggs with silkened tofu.) 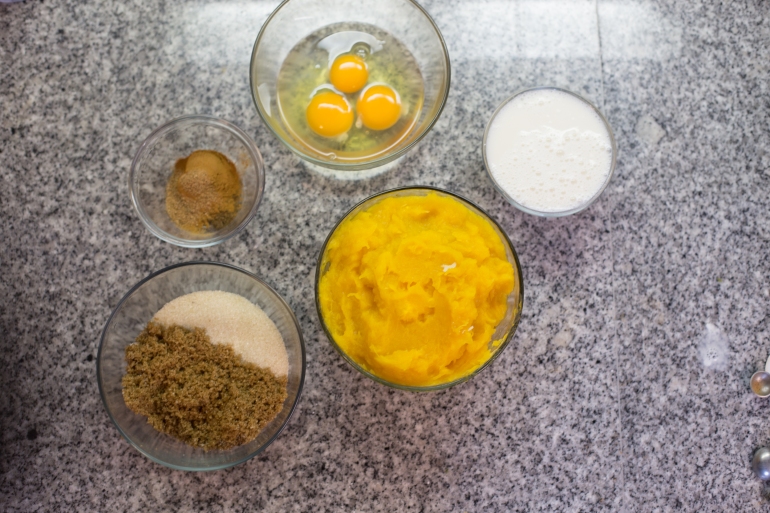 Take all of your ingredients (listed at the end of this post) and mix them together in a large mixing bowl and stir until combined.

Once your mixture pie filling is all combines, dump that stuff in your crust and bake at 350 for 55-65 minutes.  I put the pie dish on a baking sheet to give it a more even cooking. When done, the pie filling should be a consistent, burnt orange color, a little darker than the color of cinnamon.

Once your pie is cooled, it’s ready to eat! While our pie did end up cracking, (I may have overcooked it just a bit trying to get the right color) for my first attempt at making a pumpkin pie, it turned out pretty well.

If you end up making this pie, let us know how it turned out! 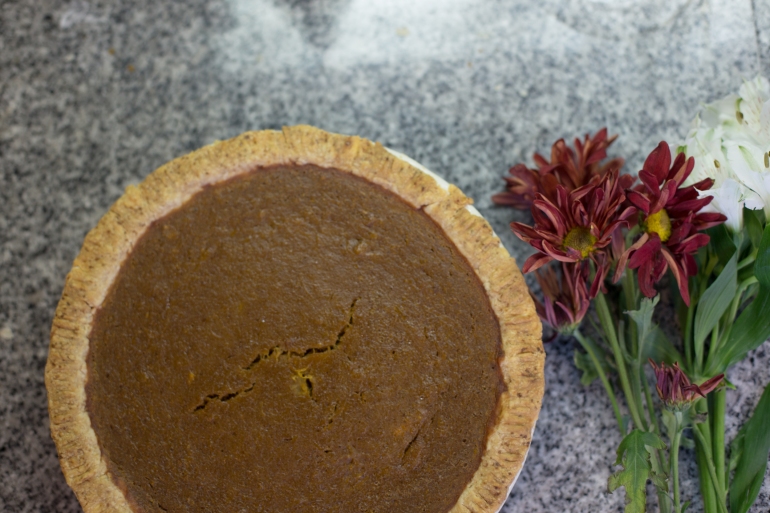 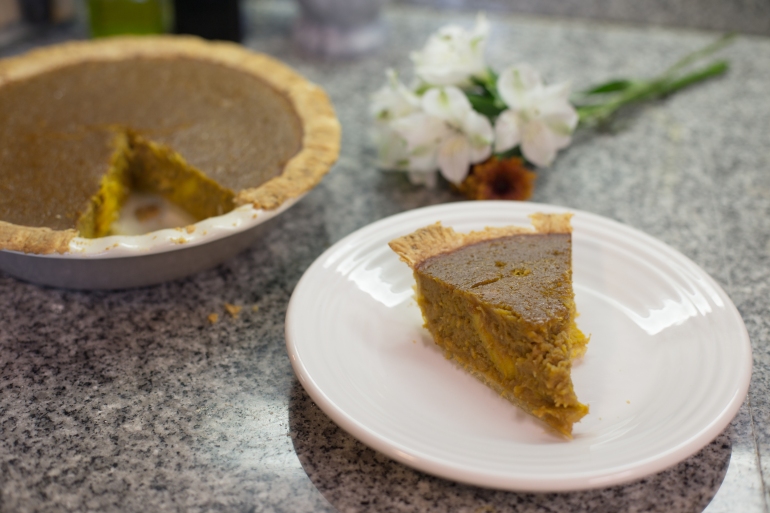